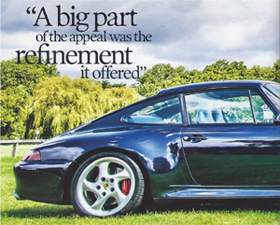 16 years ago, Peter Tognola bought his dream car. After pouring over spec sheets and taking long test drives at OPC dealers, he decided a black 993 Carrera 4S with some select options was for him. He took delivery on l August 1996, and remembers every detail of the day perfectly. It was a once in a lifetime experience.

Only it wasn't once in a lifetime. This year, he repeated the experience, and bought the same car back. And that's not the only way in which this story requires a double take ...

Many readers will already know Peter. He's the driving force behind Porsche experts Tognola Engineering in Datchet, Berkshire, the wellknown and highly regarded engineering specialist. If anyone's ideally placed to select one of the most perfect Porsches out there, it's him. But, even in 1996, it was a tough call, as he explains.

"Being an enthusiast, I took my speccing up pretty seriously," he says with a grin. "I'd noted that the spec of the C4S was already quite high: by then, it was cheaper than ordering a standard 993 and adding on many of the things it had as standard. 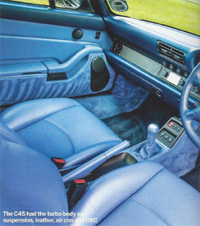 "A big part of the appeal was the extra refinement it offered over the alternative, a 993 RS. I wanted a car to use as a weekend touring machine, rather like a GT. The C4S had the turbo body, turbo suspension, leather, air con and onboard computer - it seemed ideal."

The wide-body turbo shell gave it the stance, 18-inch wheels filled it out perfectly and the fabled red caliper brakes set it all off marvellously. Peter's choice of colour, black, was the perfect finishing touch. Seeing it all laid out in the brochures, Peter's mind was made up..